"The House That Chirp Built" 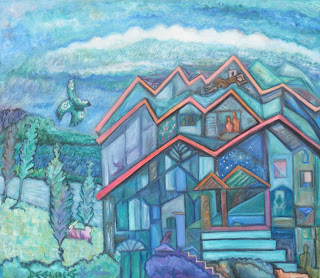 Here we are back at "The House That Chirp Built." I brightened the lawn on the left and softened the contrast of the clouds and blue sky. Some of the trees in the background have been modulated as well. The idea is to promote continuity in the environment in which the house is situated. The result is a slight differentiation between indoors and outdoors, while still retaining a hint of ambiguous space. The room on the second floor left where the purple cat peers out the window is somewhat simplified as well. I am tempted to paint an additional bunny on the left foreground, which was there originally, because it balanced the composition, but I will try to restrain myself!
Posted by Deeling at 11:25 AM No comments: