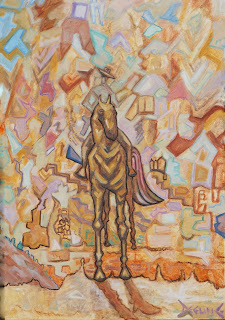 In 2009 I worked on a series of western themed paintings, some of which related to Tiny Montany's Ghost Town Sound Project. There are many picturesque ghost towns throughout the state. Many are closed to the public and under private ownership. Some of the downtown areas of Montana municipalities, like others across the country, are in danger of becoming ghost towns due to the downturn in the economy. The rider series alludes to the horsemen riding out of the past, perhaps to the rescue of endangered communities. "Ocher Rider" is a work in progress, oil on canvas, 36" x 24" started in 2009.
Posted by Deeling at 1:06 PM No comments: